Standing at over 3,700 metres, New Zealand’s highest peak, Aoraki / Mt Cook is surprisingly accessible. That is at least if you want to gaze at it in admiration as opposed to slogging to the summit. And what a sight it is; the great mount rising from the surrounding landscape, capped in permanent snow and ice.

I take it all in, while savouring a cold beer, from the balcony of my ‘mountain view’ room in the Hermitage Hotel. It all seems a little too comfortable, lounging about while surrounded by such raw natural beauty. So, to make amends, I haul myself up, pack some provisions and join Anne Marie for a wee hike. 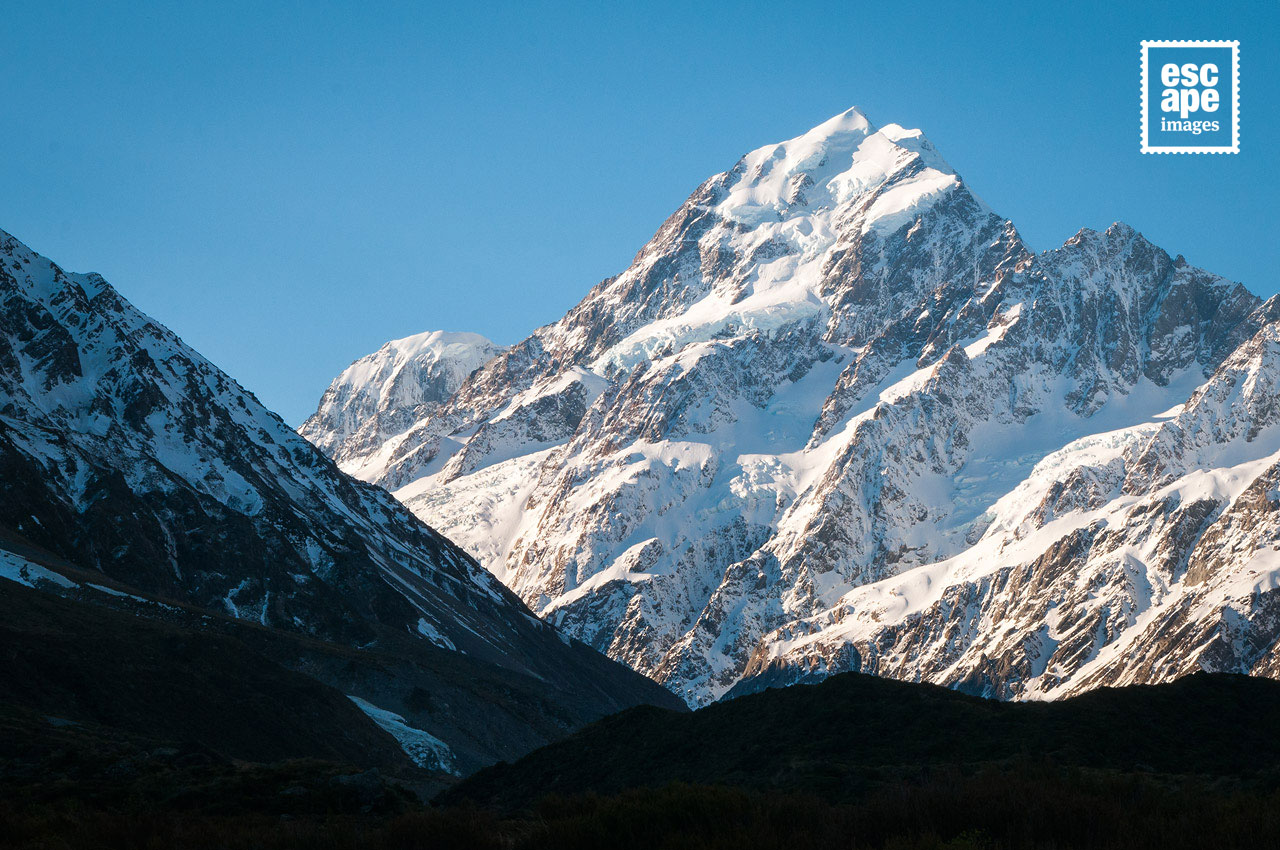 We walk along the Hooker Valley Track, an easy 1-2 hour return along the Hooker river, with fantastic views of the surrounding mountains. Mt Cook grows in size and stature as you approach, finer details in it’s crags and glacier occupy the eyes in the changing light. A crack echoes out above us and we turn to catch a cascade of snow and ice sliding down the mountain to our left. I feel happy to be down on the valley floor, where the ground isn’t quite so ‘active’. 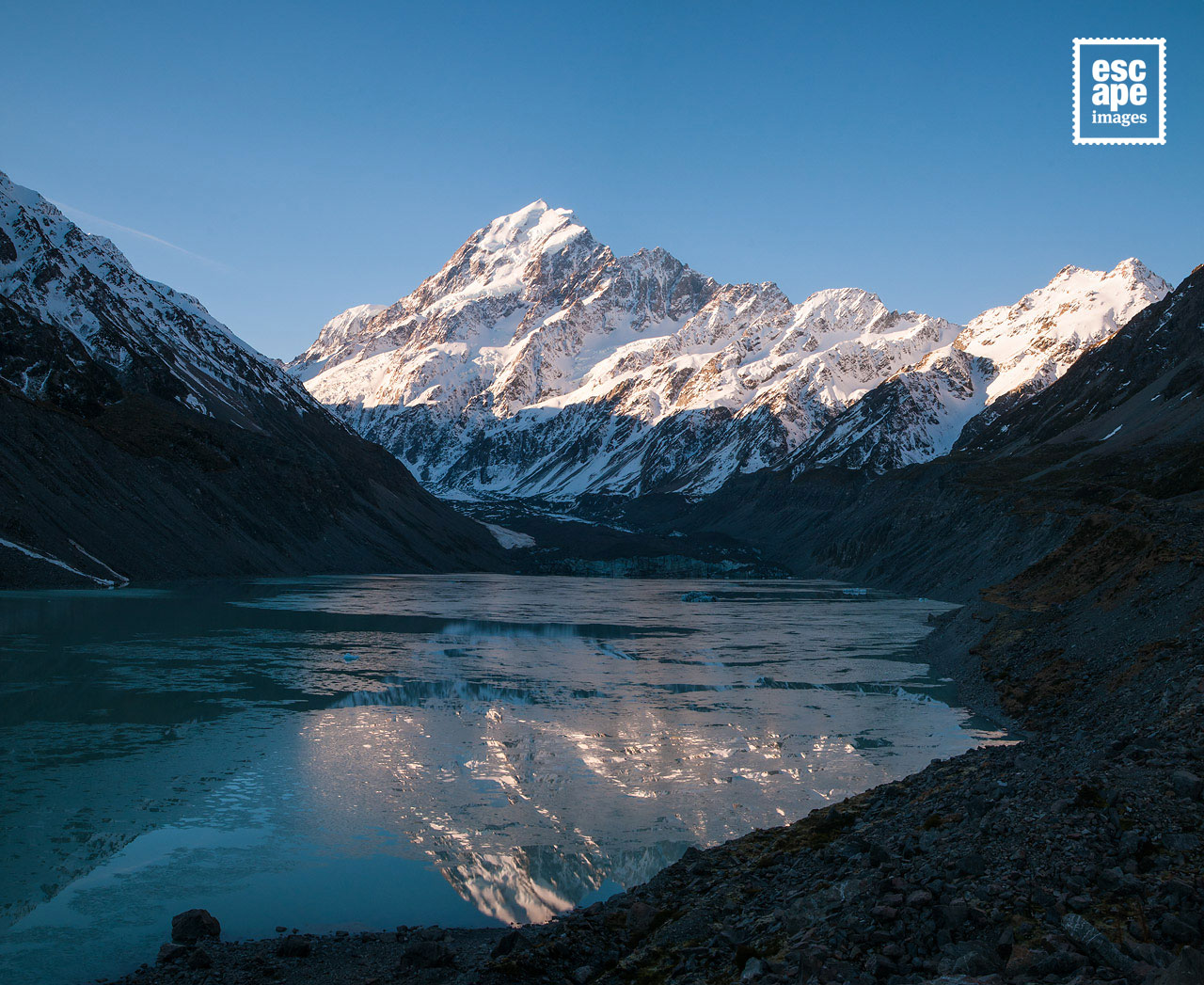 The trail ends at glacier lake, where the reflection of Mt Cook dances in the fading light. There are people scrambling over rocks, armed with selfie sticks, all around us. I wonder how many injuries are caused by creative photo positions in places like this. We settle for some standard, ‘standing in front of mountain’ shots and make a move. I want to get out of here before someone falls in the lake. 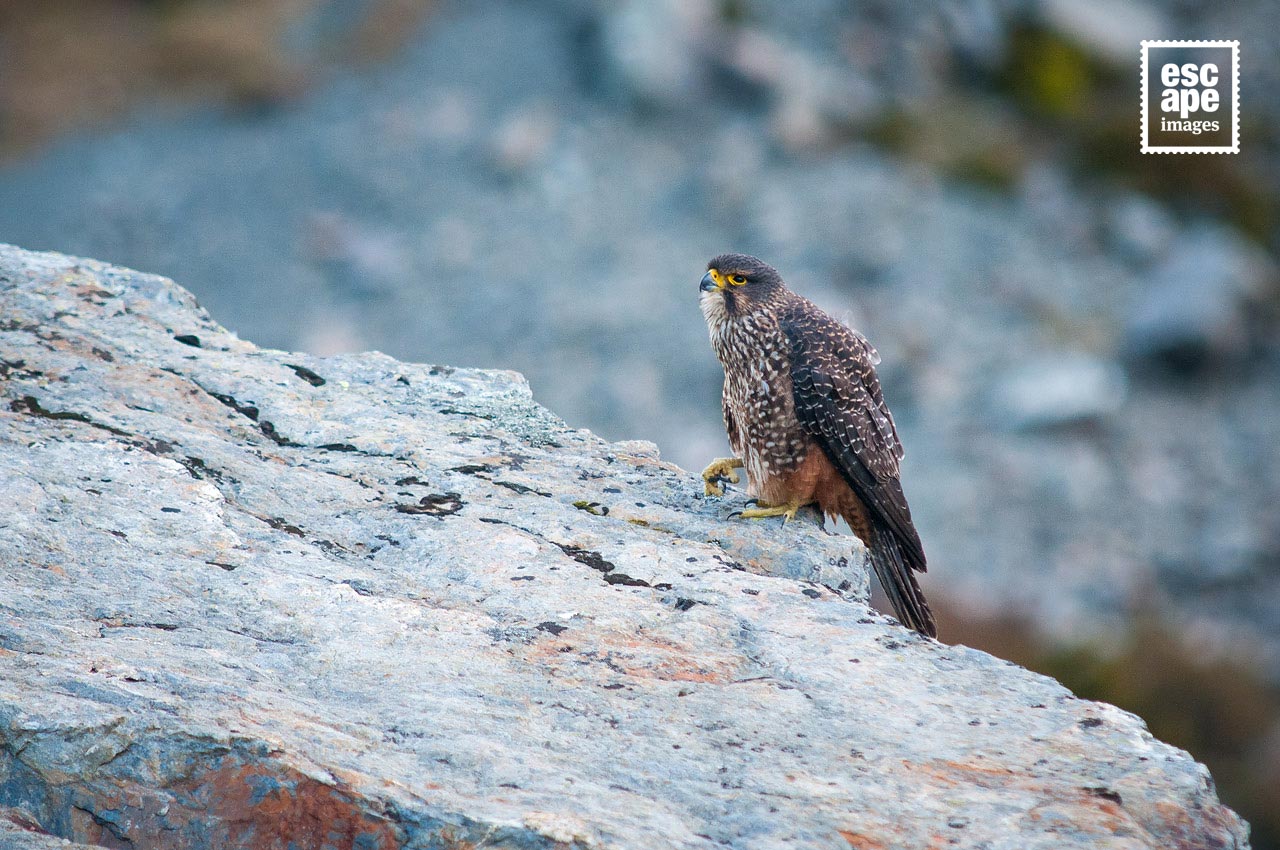 Even though we’re surrounded by snow capped mountains, it’s early spring and there is plenty of bird life around. On the return journey we happen upon a Karearea, or New Zealand Falcon. Sat on a rock about twenty metres away, the bird seems oblivious as I stalk him with my camera. The closer I get, the more apparent it becomes that I needn’t be so stealthy. These birds have no natural predators here and this guy knows fine well he can outfly me. I relax a little and get some nice close ups before leaving him to his preening. 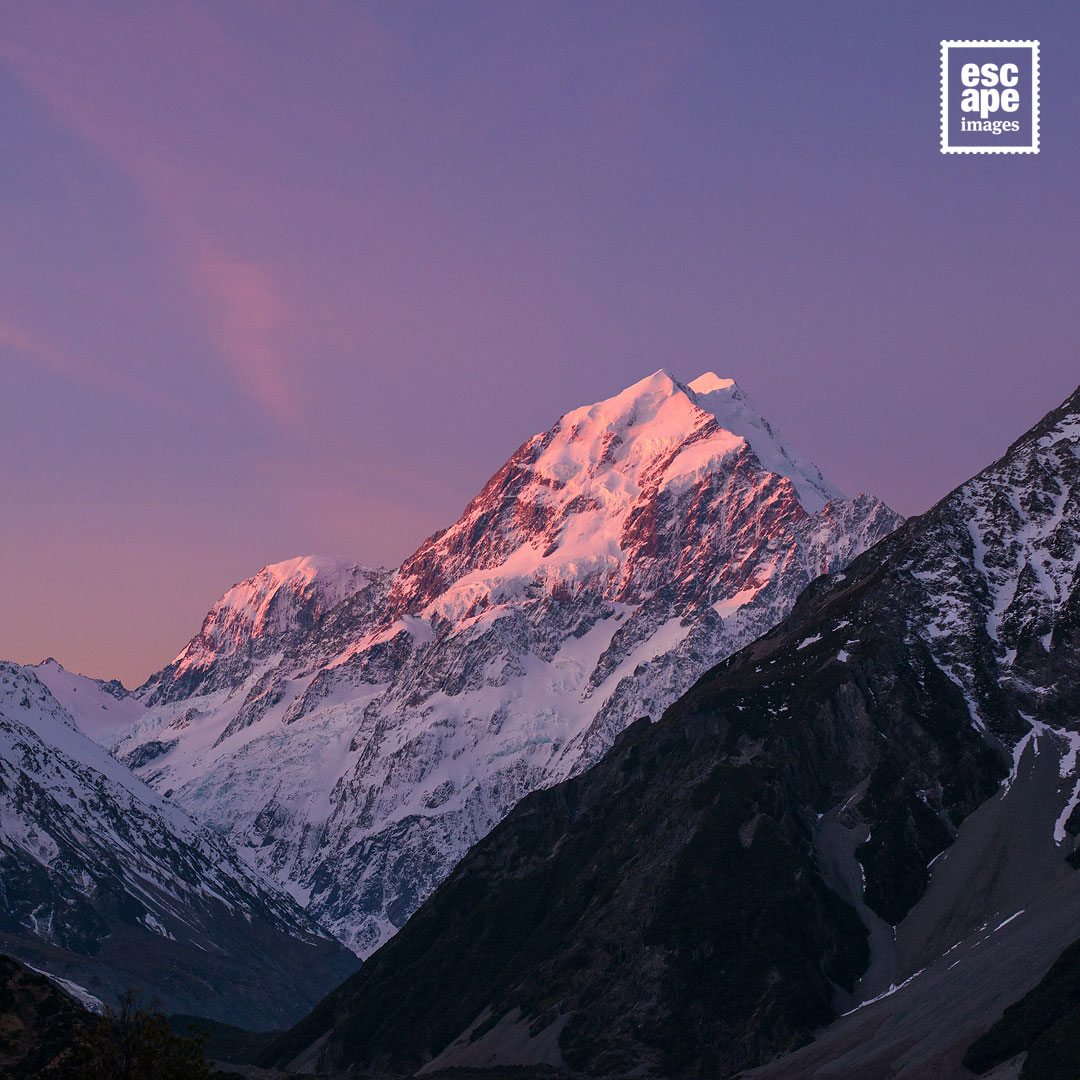 After a sunset so good, you’d think the hotel had organized the lighting, we eat and drink the night away. There’s always time for another photograph though, and a clear sky provides the perfect setting for some star trails.

It’s not easy saying goodbye to a place. Especially when it’s somewhere you fell in love with (and in for that matter) and you are leaving behind dear friends. The end of three years living in Queenstown wasn’t exactly celebrated. It was more of a ‘see you later’, which I do hope is true and I can return again soon.

So no more sob stories from me and likewise no more clichéd words of natural beauty, I’ll leave that up to the photographs…

Flight to the Fiords

It’s not every day your boss gives you time off work and it’s even rarer I’d imagine that he’d spend the day flying you around in an airplane. But alas, this is Queenstown, the place where anything and everything can happen! So on a fresh and sunny spring morning I found myself packed into a small Piper Cherokee, camera in hand, with Jon (the boss) telling me how long it’d been since he last flew and that he “hopes he remembers everything!”

I have to be honest and admit that I was a wee bit nervous as we taxied to the runway. Jon had been learning to fly, but his training was interrupted by the responsibilities of fatherhood a couple of years back. Now, after some friendly encouragement from Classic Flights in Wanaka, Jon was back in the pilot seat with a huge grin on his face. I meanwhile was crammed into the back with beads of sweat running down my forehead. The last time I was in a small plane like the Cherokee we were buffeted by high winds and I kept banging my head on the ceiling. Luckily on this occassion we had ex Royal Air Force pilot Andrew accompanying us. Previously flying Eurofighter Typhoons over Iraq and Afghanistan, Andrew now enjoys the quiet life, flying at 75 knots over the skies of Wanaka and the Southern Alps. It’s not a bad life either I came to discover as Jon calmly pulled back the throttle and we rolled down the runway, taking off at what seemed like a running pace and climbing steadily over Wanaka township. Up ahead in the distance lay the gleaming white peak of Mount Aspiring, which at 3033 metres is one of the highest mountains in New Zealand. In order to make it up over the mountain tops we’d have to maintain a steady climb for about 20mins before veering west, out toward the coast and Milford Sound. While we continued slowly upward I began to relax, confident in the professionals up front. The views in every direction drew the breath away and any nerves were soon replaced with a child like excitement and frantic shutter snapping.

The highlight of the flight came as we skirted the western face of Mount Aspiring, the morning cloud cloaking the Bonar Glacier and the jagged ridgeline piercing the sky. The shot above was taken just seconds before we banked left and headed for the coast.

The coastal route towards Milford Sound was a little sketchy, with low cloud causing some concern, but we were in luck. The clouds parted just enough for us to make our way through sheer rock walls to Milford Sound airport. For the final descent co-pilot Andrew took the controls and we nose dived towards the tiny landing strip below. Needless to say the touchdown was flawless, but I was still happy once we were on solid ground and I could get out to stretch the legs. I’m sure Jon was relieved to do the same. The return flight was just as epic, this time flying back via the Eastern face of Mount Aspiring. Jon made an absolutely expert grass landing at Wanaka airport (at first I panicked thinking we were missing the runway by miles!) and we watched as Andrew swifly transformed from trainer pilot into vintage Tigermoth pilot, complete with flying goggles. It’s a tough life for these ‘top guns’ but it sure makes a change from the 9-5 desk job I can tell you.

Many thanks to Jon from MacStudio for his flying skills and Classic Flights in Wanaka for their expert guide and aircraft.

I’ve just uploaded a brand new gallery of images taken on a recent roadtrip from Queenstown to Moeraki on the eastern New Zealand coast. The trip was certainly a very colourful one with stunning scenery aplenty. Check out the gallery here.

Heliworks pilot John Haora took me up in a R44, flying low over Lake Wakatipu and the Kawarau river to photograph the new Hilton resort complex. The key to the shot was getting in just the right position to include the lakefront, river and Remarkables mountain range to show off just how stunning the hotel’s location really is.

A group of us then took a tour in a larger Eurocopter Squirrel, piloted by Jason Laing who took us around The Remarkables, Lochy River, Cecil Peak and Earnslaw Burn with some jaw dropping views and mountain top precision landings that were just unbelievable. My hat goes off to Jason who displayed some amazing skills when controlling the chopper, at one point landing right at the top of one peak on a seemingly impossible ledge. Mount Earnslaw and it’s glacier was very impressive the last time I visited by foot, but flying directly over the ice and down to the base of the valley was a whole new experience. I loved the hike, but in future I know which mode of transport I’ll be taking!

I cannot recommend Heliworks highly enough to anyone visiting Queenstown, check out their website here: www.heliworks.co.nz and for more images from this set see the Heliworks Facebook page.

If it wasn’t the name that attracted me here, it was the promise of stunning views of a mountain top glacier and tens of waterfalls which stream from its melting ice.

About an hour’s drive outside Wanaka the Rob Roy Glacier is reached by a pretty breezy hour and a half walk through native Beech forest. The trail ends at the base of the glacier with truly stunning views of the ice which sits high on the mountain. Large waterfalls and many other small streams cascade down the hillside and the sound of rushing water echoes through the valley.

My first visit in February was on a dull, overcast and rainy day, which in my eyes was the most dramatic even though most of the glacier was shrouded in cloud. I made the journey again recently on a blue sky day and was amazed at how much of the mountain and its glacier I had missed the first time around.

The glacier viewpoint is a popular spot with hikers, a fact well known to the local Keas which often decend from the trees in small groups of five or six to harass people for food. They’re clever wee buggers too and will try and get into your backpack or jacket pockets if they can smell anything of their liking. The plus side means that they’ll happily pose for the odd photograph. 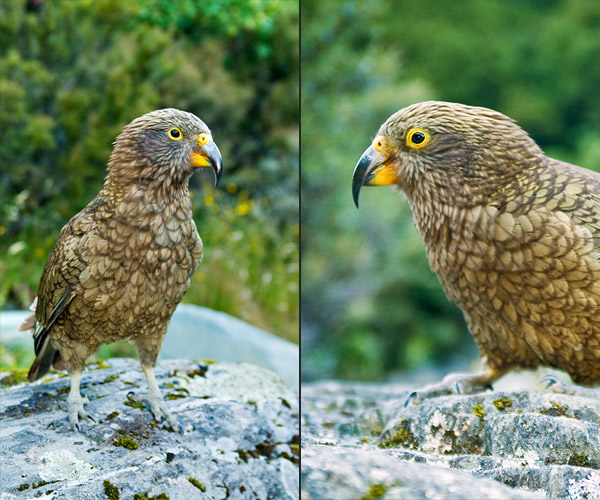 About the Travel Blog

The Escape Images Blog follows photographer Daniel Sweeney and partner Anne Marie on their travels around the world. If you are interested in photography, travel, adventure, nature or the great outdoors then there should be something here for you. Daniel is currently self employed as a graphic designer (totalbrand.co) and living in Queenstown, New Zealand.

All images and text on this website are Copyright © 2008-2020 Escape Images unless stated otherwise. All rights reserved. The use of any of these materials without written consent from Escape Images is strictly forbidden. For licensing and editorial enquiries please email danny@escapeimages.com